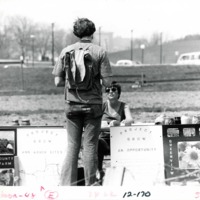 Following the successful first years of the Community Organic Garden and several smaller neighborhood gardens, a group of Ann Arbor citizens partnered with Ecology Center volunteers to start Project Grow, a non-profit organization with the goal to spread the organic gardening concept throughout Ann Arbor. The organizers recognized that many people had the knowledge and desire to garden after participating in or visiting the Garden, but they often did not have the space and resources to do so. On January 10, 1972, they presented the proposal to the Ann Arbor City Council, emphasizing the many benefits of a garden, especially its social functions.

"In contrast with so many activities, gardening is an inclusive rather than an exclusive pursuit. The typical social barriers that tend to isolate people are easily overcome by the simplicity and cooperative spirit of gardening. By providing for certain basic needs to encourage participation, a whole new dimension can be added to the pattern that is life in Ann Arbor."

To meet the demand for land, the organizers searched the city for garden sites on public, private, and church properties, and property owners donated parcels of land. In the first year, Project Grow established nine sites: County Farm, Stone School at Ellsworth, Hikone, Dixboro School, Clague School, Recycling Center, Zion Lutheran Church, Peace Neighborhood Center, and Marshall Road. For a $10 fee, participants could purchase a plot, averaging 750 square feet. Project Grow also provided gardening information, fall plowing, seeds, tools and wheelbarrows. People often planted kitchen produce, such as lettuce, tomatoes, carrots, peppers, celery and cucumbers, but Project Grow also offered perennial plots, which are not plowed in the fall, for growing strawberries and melons. A paid director and a volunteer board of directors consisting of fourteen gardeners managed the project. At each site, a committee of volunteers monitored the day-to-day activities, and each participant contributed to garden upkeep by signing up to clean up the common areas on designated "Work Days."

Since its inception, Project Grow, like the Community Organic Garden, emphasized the necessity of having a diverse group of participants with a unified passion for the earth. In the first year, over 3,500 youth and adults participated, including families, one-third of whom were low-income. Two handicapped groups, a foster home group, a Juvenile Court group, and senior citizens also participated. One ninety-year-old man farmed three plots, approximately 2,000 square feet, for others at the Lurie Terrace, a senior housing community, who couldn’t do it themselves. Project Grow emphasized the importance of connecting the vitality of the youth with the garden expertise of the old in order to accomplish its goals. Many youth groups participated, including Boy Scouts, church youth groups, and Juvenile Court groups.

As food prices continued to rise, the number of people interested in obtaining a gardening plot from Project Grow soon exceeded the number of plots available, so the organizers continued to seek out plots. Project Grow received funding from Washtenaw County and the City of Ann Arbor, but participants often had to write letters to their city councilmen and the mayor to ensure an operational budget. Today, there are twenty-two garden sites in the Ann Arbor area, and the organization continues to make a positive impact in the community by donating fresh produce to local food organizations, such as Food Gatherers and Safe House Domestic Violence Center, and by creating community partnerships with local schools, businesses, government agencies, and others. Through the dedication of staff and volunteers, generosity of donors, hard work of thousands of participants, and a shared love of gardening, Project Grow Project has continued to shape the appearance and social dynamic of Ann Arbor for over four decades.